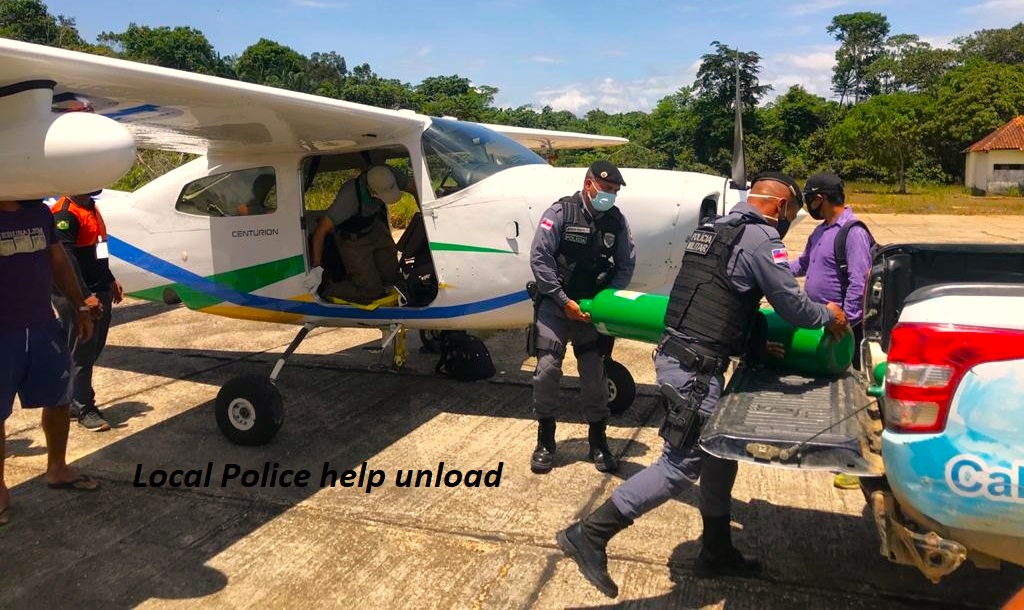 “Let everything that has breath praise the Lord!” Psalm 150:6

We don’t spend much time thinking about oxygen, until we can’t breathe. To have it, the universe had to be the mass that it is, and our sun, moon, and solar system neighbors had to have their sizes and placements as they are.* Even slightly more oxygen, and wildfires would rage out of control, as well as our bodies wearing out faster. Slightly less, and there would be too few wildfires, plus our physical and mental activity would be reduced.** Our Creator made oxygen in just the right proportions for all our needs.

By November 2020, it seemed as though Brazil had turned a corner regarding COVID-19. Unfortunately, the country was then struck by a second wave that turned out to be worse than the first. Goiás, where our headquarters is located, was on lockdown for most of March, with all nonessential businesses, including our flight department, shut tight as infection rates and death rates continued to break records.

It actually started to worsen in northern Brazil towards the end of 2020, as a new variant of the virus began ravaging the cities along the Amazon River and its tributaries. It was so bad that the hospitals in the region ran out of medical oxygen. Patients were dying because they couldn’t breathe – they lacked this very basic, but critical, need. The “lungs of the world” did not have the oxygen it needed for critical care. Along with many other people, Asas stepped in to help through the use of our aircraft and pilots.

In February, our Cessna 210 spent a week in this region delivering much needed oxygen cylinders to those difficult-to-reach communities. Those communities can be reached by boat, but delivery would have taken days, even a week. The speed of our flights, typically just a few hours, was an immense help in this emergency situation.

For our pilots, it was hard work. Each one of the cylinders weighed 165 pounds, having to be carefully loaded by hand into the airplane and tied down so they wouldn’t shift in flight. But, in the end, we replenished supplies for four principal towns in the interior of the Amazon.

We are thankful for the part we got to play in providing this lifesaving equipment and how aviation made it possible to reach these communities in a timely way. Brazil continues in the fight against Covid, especially in areas like the Amazon where healthcare is precarious. But with God’s grace we are taking one day at a time, praising Him as death tolls drop quickly and things open back up.

Our ministry in Asas de Socorro is to give wings to many things – sometimes it’s people we carry, sometimes supplies, such as these oxygen tanks – but above all, Asas is dedicated to transporting hope and God’s love to those who need it most in the interior of the Brazilian Amazon so that they too can “have breath” and praise the Lord together with us. Your partnership in giving towards the fuel fund helps make this possible.

This website uses cookies so that we can provide you with the best user experience possible. Cookie information is stored in your browser and performs functions such as recognising you when you return to our website and helping our team to understand which sections of the website you find most interesting and useful.

Strictly Necessary Cookie should be enabled at all times so that we can save your preferences for cookie settings.

If you disable this cookie, we will not be able to save your preferences. This means that every time you visit this website you will need to enable or disable cookies again.